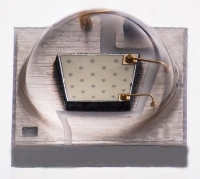 High-power color LEDs are increasingly important in a mainstream LED maker's portfolio. Such LEDs have long been used in entertainment lighting, architectural/fa?ade lighting, and niche areas such as auto applications. But tunable white and color lighting is becoming mainstream in general-lighting applications. Moreover, the royal-blue LEDs are used in remote-phosphor product designs.


Indeed, watch for our coming Lightfair reports in our June issue where we discuss a number of products that use red, green, and blue (RGB) LEDs, and others that use as many as five color channels. More channels allow product developers to both deliver high-CRI white lights at any CCT, as well as dynamic color.

Cree's new LEDs are based on the company's third-generation LED manufacturing platform that it calls SC3 (pronounced SC cubed, representing third-generation silicon carbide). The LEDs are in the identical 3.45×3.45-mm package used previously by both white and color XP-family LEDs.


Cree said that the new royal blue LED delivers a maximum of 1409 mW output at the maximum 1A of drive current and 3W operation. The output of the royal blue LED is specified in radiometric power rather than lm because the 450-465-nm spectral band is outside the human visual sensitivity range.

Clearly, Cree's 88% brighter claim was relative to LEDs from competitors and not its own prior-generation XP-E color LEDs. Based on a look at the data sheets, the new royal blue LEDs offer around a 30% improvement over Cree's prior LEDs in the same package. The improvement in the other colors varies by color but is generally below 15%. Still, that upgrade can be significant in many applications.

The last announcement of color LEDs from Cree came last October when it launched a similar color line in the 2.45×2.45-mm XB-D family along with some multi-emitted RGB LEDs.
发帖者 Unknown 时间： 下午8:20